The following reactions come out in online chess for a multitude of reasons. Maybe a take back request was denied or you just make good moves and they don’t like it. Regardless, these personalities arise all the time.

Which are you? This is a self-assessment.

The Reasonable Player
This player accepts the result of their games. They are happy when they win and disappointed when they lose; however, this doesn’t ruin their day or even the next minute. They don’t generally worry about asking for take backs except possibly in the case of an obvious mouse slip (ie: stopping 1-square short of a queen recapture or playing Kf1 when trying to castle). When the take back is declined, they move on in life. There is nothing wrong with being a reasonable player.

The Isolationist
This player configures their settings in a way to avoid contact with the opponent. For example, they may disable take backs, disable chat, and refuse to rematch people. They may also engage Zen Mode (if it is available like on LiChess) where the only thing on the screen is the board, pieces, and time. There is nothing wrong with being an isolationist.

The Santa Pause
Once a take back is declined or the opponent starts winning comfortably, the Santa Pause begins engaging in 2 distinct behaviors: 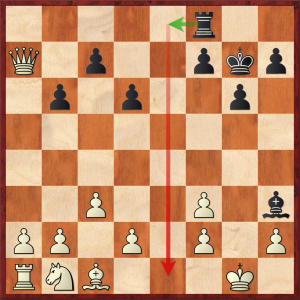 There is always the remote chance they might have a hilarious win; but, 99.99% of the time they will lose. The position on the right is from a game I played when I was around 1300 in a tournament in Kentucky. I remember he dropped his Ra8 and just started feeding me pieces. Then, I didn’t notice the threat after Bh3 and lost embarrassingly.

As far as I can remember, this is the only time I ever genuinely got Santa Paused, including during online play.

Talkers like to talk. Often, talkers are kind but more often they are snarky, rude, or jerks.

These people start saying things in the chat box after their take back is denied. You can break this down further into Good and Bad talkers. A Good Talker will say “It was a mouse slip, I was trying to castle” while a Bad Talker might say something like “Is that the only way you can win?” (or something worse). A talker who attempts verbal abuse and refuses to move becomes The Terror (see below).

Sometimes, someone will write something in a language you do not understand. That is when you use Google Translate to try to understand the gist of what they are saying. Recently, a person called me a cheater in Persian. But, 10 minutes later, followed up with this message:

The Samurai
These people get rather upset with you when you beat them on time in a drawn position. They will tell you how it is unreasonable to decline a draw in a drawn position when they have 31 seconds left and you have 1 to 2 minutes or more. When you inform them that time is part of the game, they dig their heels in and stand their ground.

The Runner
These people just exit the game without doing or saying anything. While most websites have a 2 to 3 minute timer that will offer you the chance to “claim victory,” these people are likely the most numerous of the bad personalities. Sometimes, when a Runner has 4+ minutes out of a 5 minute game, they will log back in, make a move, and log back out, just to keep the “Claim” Victory” timer going. When they do this, they turn into the “Hostage Taker” (see below).

The Equivocator
Likes to send you repeated draw offers because somehow, in their mind only, your denial of their take back request (or their bad move) means the game should now end in a draw. They feel the game is now “unfair” and feel obtaining a draw will level things out.

The Hostage Taker
Some people, when denied either reasonable or unreasonable take back requests, like to take you hostage. They will sit there for the remainder of their time forcing you to sit there, too. The more time they have, the longer they get to wait you out.

It should be noted that chess clocks were invented because of these people. Just picture a young person who is losing and they fold their arms, refusing to move. So, the chess clock makes it inevitable that they will lose.

The Terror
The Terror is a Hostage Taker who also spams you with insults, take back requests, and threatens to block you and report you. These people have only the power of their keyboards to harass you and they aren’t afraid to use them.

A special type of Terror player is when they insult you in a language they presume you do not speak. Well, Google Translate has helped me understand the mean things people have said to me over the years. Here are 2 recent ones:

Portuguese: “Vai tomar no seu cu” — Google Translate: “Will take in your ass.”

I posted this on Facebook. Many people had a fun take on what this rude person was trying to convey. But yes, people can be mean. I always block these people on whatever chess platform I am on.

If you are anything other than The Reasonable Player or the Isolationist, you have some work to do on your personality when it comes to losing. Remember, you can always get your pieces back by resigning. 🙂

This is a text widget, which allows you to add text or HTML to your sidebar. You can use them to display text, links, images, HTML, or a combination of these. Edit them in the Widget section of the Customizer.
Loading Comments...
%d bloggers like this: